Ralph Martin, Executive Director of the Lewis County Port Authority, Canton MO, has announced the addition of a transloading facility, which is just going out for bid and will provide both transloading and storage facilities. The port authority has also purchased a spud barge and deck barge to provide a transloading platform that can be moved to various locations within the district. The port district received a $1 million grant from MoDOT to assist with the funding. 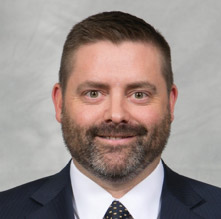 David George is currently a financial advisor with Edward Jones in Mt. Pleasant, Iowa.  Prior to that he was a banker for 16 years.  He was the Economic Development Director for the Southeast Iowa Regional Planning Commission for 2 years.   David holds a undergraduate degree in Mathematics from Monmouth College, in Monmouth, Illinois and a Master of Business Administration from St. Ambrose University in Davenport, IA.  He is also a graduate of the Graduate School of Banking at the University of Wisconsin-Madison and hold an Executive Leadership Certificate from the University of Wisconsin at Madison.  He owns and manages investment properties in the Henry County area.

David was born and raised in Burlington. He and his wife, Stephanie, have been in Mt. Pleasant, Iowa for the last 15 years.  They have 3 boys: Tayten 8, Tanner 6 and Ty 4. The family enjoys sports of all kinds, fishing and hunting

Joseph A Steil is Vice President / Relationship Manager at MIB (Midwest Independent Bank) in Keokuk, Iowa. He is an experienced Community Bank and Holding Company Executive with demonstrated success in leadership. Strong professional with an ABA Graduate School in Banking Degree from the University of Wisconsin-Madison. Experienced in the financial and insurance industries, economic development arena, and engaged leadership with civic/non-profit boards. Joe has been involved in leadership with multiple economic development initiatives in various cities and states throughout his career. He continues to be very active in the tristate area serving in a wide variety of organizations that emphasize bettering the geographic area.

Daniel Wiedemeier of Burlington, Iowa is the gubernatorial appointee.

Kelly Waymon, Jefferson County, MO was recently appointed to the MAPC board by Governor Michael L. Parson. He is Sr Vice President-Preconstruction Services-mechanical contractor serving over15 states. He has over 37 years’ experience industrial construction including, but not limited to dust collection, thermal oxidizers, combustion system installations, NESHAP compliance installations, fabrication and erection of Industrial process and material handling systems for agricultural, mining (above and below ground) and manufacturing. Managed various terminal system installations for both barge and rail. Waste treatment system fabrication and installations.

Kelly is a former small business owner and farmer. Certified in Mine Safety and Health Administration and OSHA. Licensed pipefitter, sheet metal worker and universal refrigerant work. He is a graduate o Ranken Technical college in 1980.